Edison ran to Boston, Gillian is staying in home as she’s ‘sick’.

I guess you all read the news about Edison with others like Gillian, Bobo and Cecilia.

I read from the newspaper during the flight yesterday, and I don’t think that’s real one.

But this morning, I read through the forum and also checked out some photos, I was like..how can be like that?

I personally think that those photos are real and seem perfect in every angle and position.

Hmmmm.. Some people said there’re still lots more to come, will post up the photos which taken during the past 7 years.

That’s NOT pity at all IF there’re all REAL at the end. As you all know, DON’T take picture.

Phew, I just packed my baggages, there’re not much things to pack but seem so hard to stuff all the duds into the case. Anyway, it’s done.

Oh, Jason, my cousin, was going to Brunei with my Uncle today, and he will fly to Perth by his own tomorrow, hope everything is okay and may GodFather guide him all the way. Take care. Also, hope yiyi will not cry so much in home. hehe. My sis is going to Perth also at the first day of cny. Telling myself that I or we should not be unhappy because this is not the bad thing, that’s life, especially for student.

Yeah, have the great cny at hometown! 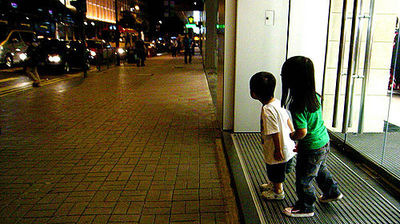 And it’s already 6pm now, the sky getting dark, guess that it’s another raining night.

Will continue the tv after shower later. hmmmmm

Just back from Midvalley and staring at the screen, don’t know what to do! Don’t feel like to watch drama so just keep surfing on the net!

I’m watching 野蛮奶奶 (war in laws) recently, it’s quite okay and funny too! And also finished the 律政新人王 (survivor law), not really good but acceptable when you’re really free! hehe. I am quite looking forward to the new drama at the end of this month which is called 和味浓情, because it’s all talking about my favourite food, JAPANESE FOODS! And it makes me want to go Japan too, hmph… I was starving when I was watching the trial at tv! I need to make sure that I’m always fulled when I watch that. And another movie which is on show during chinese new year is 最美丽的第七天, hehe, is kevin and niki again! Nice. But the new drama recently is quite terrible which is called 秀才爱上兵! I can’t believe that yumiko can act, and she’s far more different from niki, niki is chipper but yumi like more wild I guess, eeeeee… Some people just keep scolding yumi in the forum, they even said the yumi just made them want to vomit when she acts cute and thanks god because she makes them have the time to study. hahah!

One more thing, kevin is coming tomorrow at sunway pyramid…hmmmm Might not going, no ticket and I am not the idolater like before anymore.. But you guys who hasn’t see kevin in real before should go for it, because he’s really really attractive, even my mum said that too! hehe

wanmei was knocking my door just now, I can’t believe that fui was flashed on my mind, I thought he is going to give me another surprise!! When I opened the door, wanmei gave me a magazine and went into the toilet!! And I laughed to myself! STUPID!

Phew, just back from KL with wanmei. It’s okay as we only went out like about 3-4 hours, plus, it’s weekdays, so not much ppl and easy to get the cab too! hehe

I will go back home 6 days later. I am quite looking forward to the chinese new year as I didn’t celebrate the cny at hometown last year and this is the first cny that I gonna celebrate with fui. haha. I like cny too, so much foods, so much friends, so much entertainments perhaps, of course, so much angpows!!!!

There are only some vegetables, tofu, eggs in the fridge now, I have no idea what to eat tonight.

I used to update my blog everyday but it seems like it’s lack of update recently. And fui taught me a lesson these few days, I am just the kind of person who is lack of stamina and always no confident to finish a thing or what, I wonder if I am really that worse!

or I am just not interested to something? okok, no excuses or runaround.

Hmm.. I will pick it up and try to blog frequently!

Somehow, I am just staying in home these few days, tomorrow will be the same cos I would not go out at the public holiday! I already think what is my breakfast now.. not instant mee please.